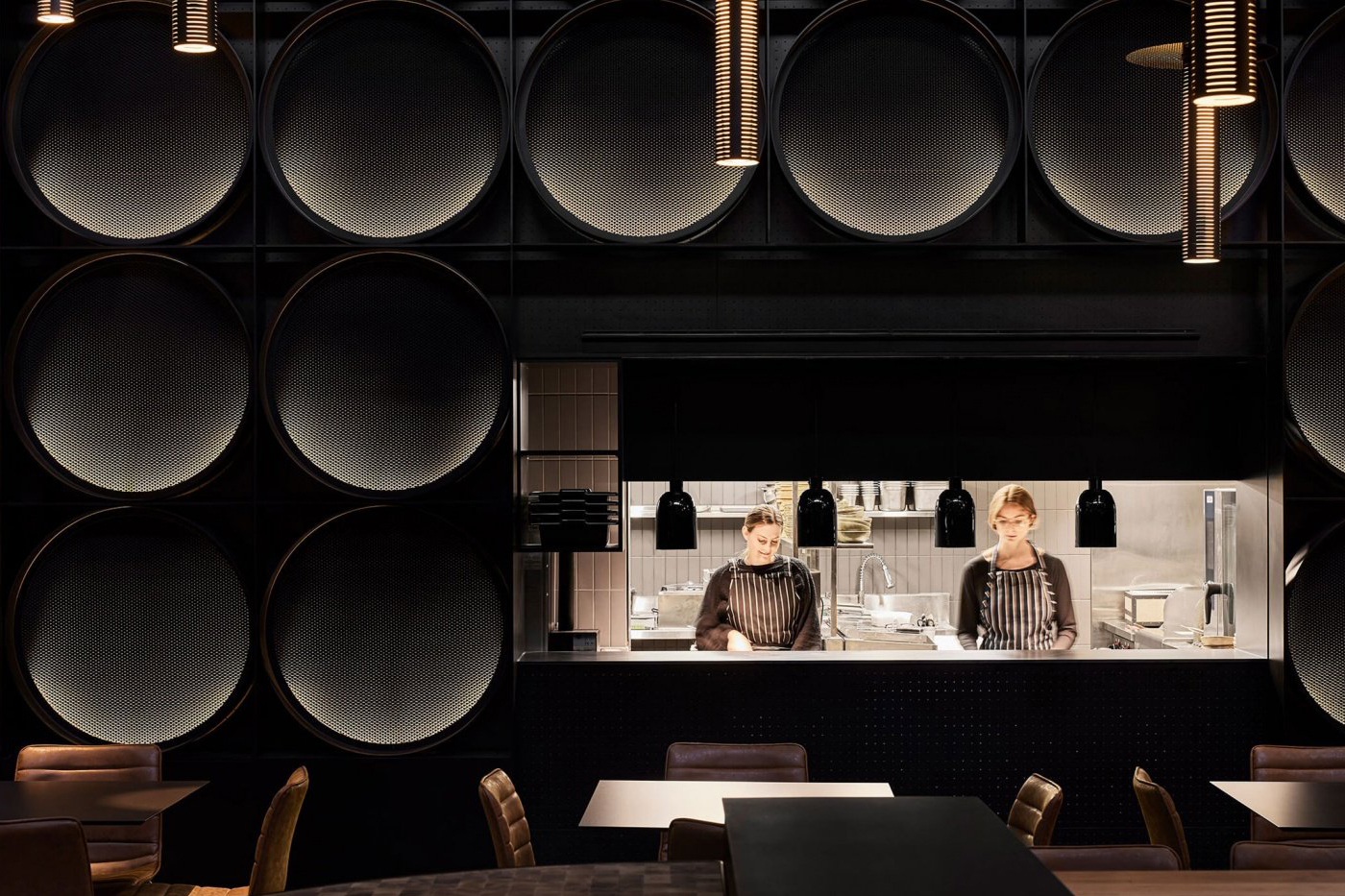 In recent years, as craft brewing in Australia has grown in popularity, a slew of new breweries have sprung up in Melbourne, many of which also function as pubs and restaurants, adding to an already crowded field. Standing out in such a context is no easy feat so kudos to Deeds Brewing whose recently opened taproom is a sleek hospitality venue that immerses patrons right into the very centre of the craft beer production process. Located in Glen Iris, a leafy suburb, Deeds Brewing Taproom sits within the industrial facility of the eponymous brewery, a non-descript brick building that makes the dramatic fit-out by architecture and interior design Splinter Society all the more thrilling.

Founded in 2012 by passionate beer lovers Patrick Alé and Dave Milstein, Deeds is an award-winning craft brewery focussing on hazy, sour and barrel-aged beers and guided by quality and innovation as attested by a prolific limited-edition program that sees four new and unique beers brewed each month. The company’s new in-house hospitality venture, which opened its doors in the summer, two years after moving into a former car dealership, proves that the pushing-the-boundaries ethos is not just confined to beer production.

The space feels upscale, refined and sophisticated, and yet brims with the raw energy of a working brewery thanks to Splinter Society’s creative engagement with the venue’s industrial context which has been used both as a backdrop and a source of inspiration. The designers have wrapped the space in black metal mesh screens that allow glimpses of the industrial facilities, while leaving the building’s steel structure, sawtooth roof and parts of the original brickwork exposed. Fermentation tanks built into the bar and aging barrels stacked in the dining room further hint at the venue’s multi-faceted character as well as serve as a template for the circular patterns dominating the interiors – from the softly illuminated circular screens, to the circular lights integrated into the bar counter, to round mirrors in the bathroom and a bespoke ring-shaped chandelier.

The predominant palette of polished black steel is softened by brown suede and natural wood textures, as well as a large floral installation created by floral artists Alchemy Orange. Bespoke tables have been fashioned from recycling timber roof beams that required replacement while a custom-designed check pattern made from distinct wood grains is used for key elements like the elongated central bar which impressively features 28 taps pouring 22 different beers.

As impressive is head chef Paul Kasten’s menu which borrows heavily from the brewery for ingredients with dishes such as wagyu steak glazed with ale, blue grenadier battered in Deeds Draught, and a malted cheesecake served with hops and berries. And if serving craft beers and beer-infused dishes in the heart of a brewery wasn’t enough, weekly brewery tours should serve to satisfy even the most discerning beer lovers.