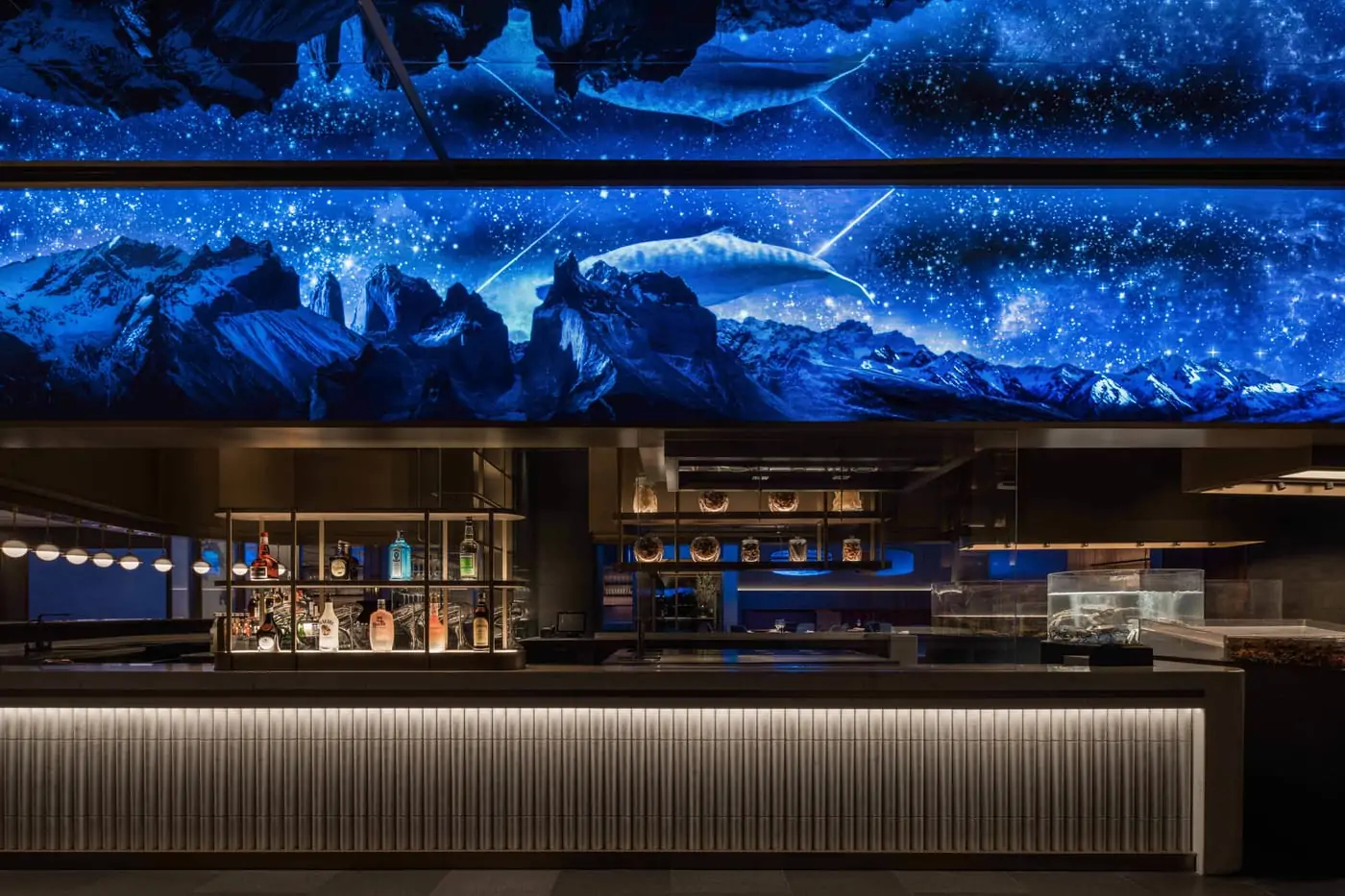 Baozhang Sun, the magistrate of Henan in Qing Dynasty, said ‘Fishes swim across the pine shadows in the pond like they’re on the tree’, which has been taken as the metaphor of the light reflection and direct transmission. This is a land of illusion, where morning and moonlight are intertwined. There is no water in the air but fish can swim in the forest and the mist lingers there. You cannot find it whether it’s in a dense forest or a deep ocean. The dining space with ‘mysterious jungle’ as the core of the landscaping comes into being.

The guests enter the XU JI Seafood Restaurant (Land Kylin) from the 4th floor of W Hotel, where the light suddenly dimms and the space begins. The star spotlights come out from the ‘bottom of the tree’. The blue light floats in the distance, and the big fish swims there, like a dream and yet not. Guests will follow the light to enter, from the ‘jungle’ to the ‘deep ocean’, gradually into the mysterious realm.

When reaching the central area, the light floats which is from the giant curved LED screen on the top and dyes the surroundings. Guests can see the whole picture of the restaurant here.

In the use of formal language, the designer adopts fragmented and de-symbolized strategies but maintains the continuity of the overall spatial sequence. By operating the structures and materials in the space, and intervening in the layout of the furnishings, the designer creates multiple montage spaces with different sizes and states but connected each other.

This is a kind of commemoration of oriental aesthetics. Its implicit inner quality is revealed through modern context where it takes the space as a medium to establish the relationship between time and space and forms a narrative space.

Here, the use of the mirror does not make the space excessively lose its subjectivity, but instead makes the client’s somatosensory consciousness and visual perception fully respected, concealed, spanned, linked, and felt secretive beauty.

The restaurant dining hall uses highly reflective materials, and the reflected scenery invisibly enriches the level of space and visually expands the space. The frame-like mirror surface breaks the heaviness of the solid wall.

Walking inward again, there is a tea tasting area in the box, where the dinners can take a short break before and after the meal. Upon opening the sliding door, the dining table is set with wine and delicacies. Diners can enjoy the feast while looking at the scenery outside the window here.

Taking the central island as the center of the restaurant, and bar counter function as the response to current lifestyle. This western-style expression has incorporated the Chinese rhythm, were hoping the East and the West can communicate.